The vagus nerve plays a significant role in the origins of neck issues and in the treatment of colic in small babies. Nerval issues do not appear in x-rays, and the root of the problem often is damage to fascia or ligaments, which may result in many secondary sets of symptoms when the vagus nerve is under pressure. This may come from a background of whiplash trauma or muscle tension developed during the foetal period or birth.

What you will learn:​
Note: Reflexological treatment is done by using your hands, but additional reflexology tools such as wands may be used as some areas/points are very small. You can also do the practice treatment on another person.
Anna-Kaarina Lind’s book Reflexology and Infantile Colic: A Step-by Step Guide for Parents and Nurses (2009) includes easy-to-follow instructions with illustrations. 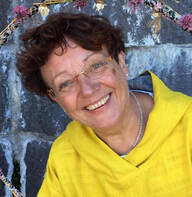 BIO
Anna-Kaarina Lind is a Finnish physiotherapist and reflexologist born in Helsinki, Finland in 1951. She now lives in Tampere with her husband and her dog, near her family of two adult children, four grandchildren and a two-year old great-granddaughter. From a young age, she has been interested in a natural way of living, and she has always had a passion for helping others.

Anna-Kaarina graduated as a physiotherapist in 1973 and worked in clinics and hospitals for several years until she founded her own physiotherapy clinic with her husband in 1980. She began learning reflexology in 1983 when she attended a course by Karl-Axel Lind (not related), a reflexologist, researcher and teacher who practiced in Sweden, Norway and Finland. After attending her first course, Anna-Kaarina began to use reflexology in her physiotherapy clinic. She later became Karl-Axel Lind’s assistant for his courses in the Nordic countries. In 1987, she founded the reflexological training school Medika Nova Ltd, and continued working alongside Karl-Axel until his death in 2012.

Anna-Kaarina has held seminars and courses in Finland, Sweden, Estonia, The Netherlands and Denmark and shared her knowledge of reflexology with a great number of healthcare professionals. She was one of the first to start a reflexological research on “colicky babies” and “reflexology as a pain relief during delivery” in the University Hospital of Tampere in 1997.
Anna-Kaarina still has her reflexology clinic and training center and continues to organize courses in Finland.
This webinar is one hour long with a 15-minute Q&A at the end.   It is not sold individually, but forms part of RAC's International Virtual Reflexology Conference held in March 2022.